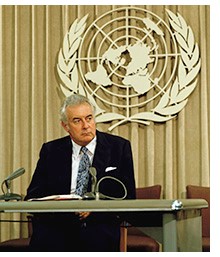 Gough Whitlam became Australia’s 21st Prime Minister on 5 December 1972. His Labor government, the first after more than two decades, set out to change Australia through a wide-ranging reform program. Whitlam’s term abruptly ended when his government was dismissed by the Governor-General on 11 November 1975. After serving in the Royal Australian Air Force, Whitlam joined the Australian Labor Party in 1945. He became the Member for Werriwa in Sydney’s south in 1952, retaining the seat in 11 more federal elections over the next 25 years. Whitlam led the reform of the Labor Party platform during the long years in Opposition. As Prime Minister he immediately set about implementing a reform program that included strengthening Australia’s status by making Queen Elizabeth II Queen of Australia. His government drew on international agreements to develop programs on human rights, the environment and conservation. Gough Whitlam died on 21 October 2014. (Source: primeministers.naa.gov.au)

Sara Carvalho is an acclaimed soprano who has performed in a number of operas and musicals, including ‘Die Fledermaus’, ‘The Magic Flute’, ‘Madama Butterfly’, ‘The Merry Widow’, ‘West Side Story’, ‘Hansel and Gretel’, and ‘Jane Eyre’. Sara graduated from the ANU School of Music in 2003 with a Bachelor of Music (First Class Honours). In 2002, Sara received a Canberra Critics Circle Award and a Canberra Area theatre Award for Best Actress for her role in West Side Story, and in 2004, a Best Supporting Actress Award for her role as Adele in ‘Die Fledermaus’. In recent years Sara worked at the Venetian Macau Resort Hotel where she was the lead vocalist. Sara returned to Canberra in 2012 and taught music at Lyneham High School.

Marc Dawson, Cricket book author and former ABC broadcaster, is a long-standing Canberra radio announcer who retired from the airwaves in 2014 after a 38-year career with the ABC. From the late 1970s, he presented a number of programs on 666 Canberra (formerly 2CN), including the breakfast show, afternoons, drivetime, nights and Grandstand sport, before settling into the morning news-reading role in 1986, which he occupied until 2014, a record length for a Canberra radio announcer in the same shift. Marc has also written a number of cricket books which have been published in both Australia and the UK.

One of Marc's daughters, Courtney, included in this listing, attended North Ainslie Primary, Campbell High School and Dickson College also went on to work for the ABC, in Sydney, later becoming an independent filmmaker.

Leon Ford is a prolific actor, director and screenwriter. He has appeared in many television and theatre productions including ‘All Saints’, ‘East West 101’ and ‘McLeod’s Daughters’. He wrote and directed ‘Griff the Invisible’. He is the author of the 2009 story ‘What Doesn’t Kill You’ and is most famous for his roles in ‘Changi’, ‘The Cook’s and as the character of Lt. Edward ‘Hillbilly’ Jones in the Tom Hanks-Steven Spielberg produced TV series ‘The Pacific’.

Harold Gretton is an internationally renowned classical guitarist and composer. He has performed in guitar festivals all over Europe, the US, Asia and Australia. He plays a mixed program of new music, including Australian works, and older classics. Harold has performed as soloist with different orchestras, including the Orquestra Filarmonia das Beiras, the Canberra Symphony Orchestra, and the ANU School of Music orchestra. He has won numerous competitions, in Bratislava (2010), Vienna (2007), Cordoba (2007), Coria (2008), Transylvania (2008), Sernancelhe (2008), and Lagonegro (2006). He was awarded second prize in competitions in Tokyo (2008) and Gisborne (2005).

Lincoln Hall OAM was a veteran Australian mountain climber, adventurer, and author. Lincoln was part of the first Australian expedition to climb Mount Everest in 1984, and he reached the summit of the mountain on his second attempt in 2006, surviving the night at 8700 metres on his descent. Lincoln Hall was a founding Director of the Australian Himalayan Foundation and the author of seven books. In 1987 he was awarded a Medal of the Order of Australia for service to mountaineering and in 2010 he won the Australian Geographic Society's Lifetime of Adventure award. He was a life member of the Australian National University Mountaineering Club. He died 20 March 2012.

Matthew Le Nevez is an award-winning Australian actor. He is best known for his role as Dr Patrick Reid in the TV series ‘Offspring’. His character was killed off after he decided to leave the series, and made Australian headlines following an outpouring of grief from ‘Offspring’ fans. His break-through role, of Bullet Sheather in the miniseries ‘Marking Time’, won him an AFI Television award in 2004 for Best Actor in a Supporting or Guest Role in a Television Drama of Comedy. He won critical acclaim for his role as a convicted murderer Mathew Wales in the TV movie ‘The Society Murders’. He won the Most Outstanding Actor Logie in 2006. It was announced in July 2014 that he would be co-starring in upcoming drama series ‘The Kettering Incident’.

Lisa Moore is a world renowned and critically acclaimed pianist. She has been described as ‘New York's queen of avant-garde piano’ and a ‘visionary’ by The New Yorker magazine. Her performances often incorporate theatrical elements and in 2008 she curated the Canberra International Music Festival ‘Sounds Alive’ series. She has performed with a number of ensembles including the New York City Ballet, the Chamber Music Society of Lincoln Center, BargeMusic, St. Lukes Orchestra, the American Composers Orchestra, and the Australia Ensemble.  Lisa has released four solo albums and collaborated on a further 30 albums.

The Telopea Park School archives collects materials relevant to the history of the school, the building and contents, students, staff and the wider school community. It also takes into account ACT privacy legislation and does not collect confidential information such as aptitude testing results.

The collection includes administrative materials, such student rolls and registers from 1923-1969, student records 1955-76, and some minutes of affiliated bodies such as the P and C and the School Board. It has documents relevant to the history of the school, including materials relating to the signing of the French/Australian agreement in 1983. There is a very large collection of photographic materials dating from the opening of the school to the present day. Available school publications include school magazines, copies of the "Illustrated History of Telopea Park School 1923-1983" and a variety of curriculum documents and school reviews. The ephemera collection contains programs for sporting events, award nights and drama productions, student work, newspaper cuttings and architectural drawings. Memorabilia in the archive includes souvenir materials, uniforms and badges. The school also houses a number of artworks including a very large painting, other paintings and original drawings, sculptures and installations

Access to the collection is via the school archivist and an appointment is necessary for this. Please note that the school is constrained by the provisions of the Privacy Legislation and access to individual student records is limited.